In continuation from the previous post, today I’m going to have a look at a female character with autism in the 2006 indie romantic-comedy drama (that’s a LOT of genres! 😛 )  ‘Snow Cake‘. 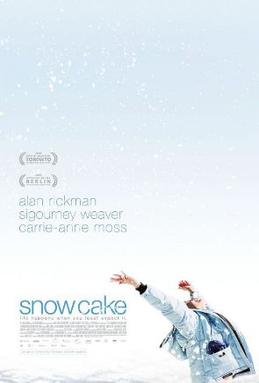 As discussed in my last post, gender bias is often an issue when it comes to women on the spectrum. Autism is viewed as a predominantly male condition, and as such this is reflected in Hollywood portrayals of autism.

We’ve all heard of ‘Rain Man’, but “Rain Woman” is rarely seen.

‘Snow Cake‘ is a really interesting example of this seemingly rare portrayal of autistic women on screen.

Starring Sigourney Weaver and the late Alan Rickman, ‘Snow Cake‘ explores the unusual relationship between Linda (a woman with high functioning autism) and Alex- a man who comes to visit Linda after her daughter Vivienne is killed in a car accident in which he was involved. Feeling guilty that he survived the accident, Alex set’s out to meet Linda and bring her some gifts that Vivienne had bought prior to her death, finding himself reluctantly drawn into her world.

You can view a trailer for this film below:

Before I get into the discussion of this, there is one line in the film (that can be seen in this trailer) that stands out for me:

“I know all about autism- I’ve seen that film!”

Granted, this line was likely included as a slight from the screenwriter, (a parent to an autistic child), towards public perceptions of autism, buuuutttt it does reinforce the importance of not believing everything Hollywood tells you of autism- something that one need bear in mind as to the portrayal of autistic women in this film in particular.

In terms of scientific portrayal of autism, the film gives a fairly accurate depiction of the symptoms.

There is one major flaw…

This is a common problem in on screen portrayals of autistic women as much of the information available to actors refers to male experiences of autism. For example, Diane Kruger was advised by a man with autism for her portrayal of Asperger’s syndrome in the series ‘The Bridge‘. When AS was featured in an episode of ‘Grey’s Anatomy‘ many years ago, a behind the scenes featurette revealed that the actress based her performance on a boy she knew with autism!

For her role in ‘Snow Cake‘, Sigourney Weaver conducted a lot of research into the role and was actually coached by a woman with autism- Ros Blackburn. Aside from her endearing eccentricities however, the character of Linda does not differ greatly from other films featuring male characters.

The problem here may lie in the script for the film, as screenwriter Angela Pell is mother to a boy with autism, and her writing would have been heavily influenced by her experiences.

However, the film does provide a good reflection of the reality of autism in that Linda is not a savant or overtly intelligent as is often over-represented.

In addition to this, Alan Rickman interestingly chose not to research autism ahead of filming in order to accurately reflect the reactions and frustrations that an outsider would experience in an encounter with an autistic individual, adding a further dimension of realism to the film. 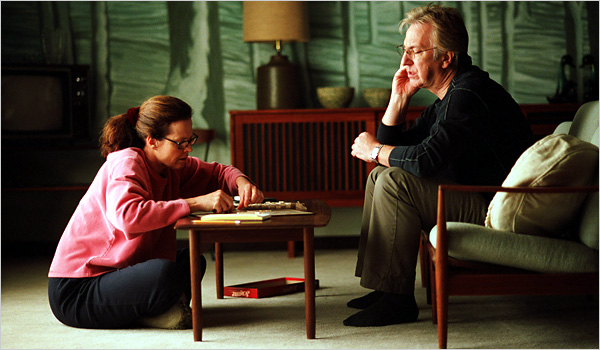 All in all, gender issues aside, ‘Snow Cake‘, while not the most riveting of films (wasn’t my cup of tea) does paint quite a realistic picture of life with autism.