This week I’d like to discuss the portrayal of autism in the 1993 comedy-drama film ‘What’s Eating Gilbert Grape‘ starring Johnny Depp, a young Leonardo Dicaprio and Juliette Lewis (who ironically portrayed an autistic character in ‘The Other Sister‘ a few years later). 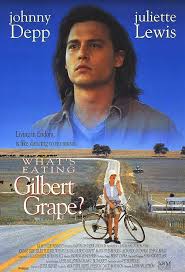 The story follows Gilbert Grape (Depp) a young man living in a rural town in Iowa as he takes care of his obese mother and autistic brother Arnie (Dicaprio). The film explores Gilbert’s life and struggles to take care of his family whilst trying to forge a life of his own.

If you haven’t seen this classic, here’s the trailer:

So how does the film fare in it’s depiction of autism?

Autism is not explicitly mentioned as such in this film, but most experts agree that Arnie’s traits align with those of autism. His repetitive movements, echolalia, self injurious behaviours, use of atypical speech, preference for routine, his childlike nature, mind-blindness and lack of danger perception (he has a fondness for climbing the town water tower) all indicate that Arnie is on the spectrum. This is also one of the few films where the autist is not portrayed as a savant so that’s a refreshing change!

Leonardo Dicaprio’s acting is, as always, sublime- he even received his first ever Academy Award nomination for his portrayal of Arnie in this role. In particular I felt that the depiction of meltdowns was quite good, however, the most striking aspect of the film, as in Atypical, was how it highlights the struggles that the wider family often experiences with autism, particularly where siblings are concerned. Gilbert loves Arnie dearly, but taking care of him and his entire family takes it’s toll.

The film also takes a more lighthearted approach at times to Arnie’s eccentricities. Arnie’s lack of filter delivers some of the more humorous moments in the film, which like Atypical, allows us to see the funnier side of autism- yes autism can be challenging, but it’s not all doom and gloom.

All in all ‘What’s Eating Gilbert Grape‘ gives a fairly decent representation of autism, but either way- the film is worth a watch just for Leonardo Dicaprio’s performance. This film really was a sign of things to come for him! 🙂