Today we’ll be taking a look at the representation of Asperger’s syndrome in the 2009 (although filmed in 2005) romantic drama film ‘Adam‘ starring Hugh Dancy and Rose Byrne. 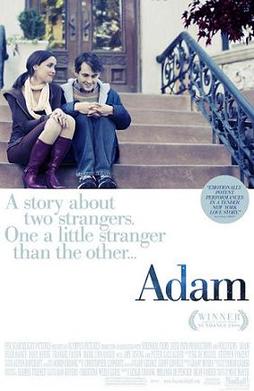 ‘Adam‘ focuses on the relationship between Adam, a man with AS, and Beth, his neurotypical next door neighbour, as they embark on a romantic relationship. The film charts their relationship from unorthodox origins (Adam unwittingly asks Beth if she is aroused one night when struggling to read her emotions) to (**SPOILER ALERT**) strained ending, as both parties endeavor to better understand the other.

So how does ‘Adam‘ rank in it’s depiction of autism?

Scientifically speaking, ‘Adam‘ presents the audience with many of the classic characteristics of AS, providing insight into the emotional, sensory and social issues which many of us deal with on a daily basis, such as Adam’s struggles with job interviews.

One of the finer details in the film that stood out for me was how Adam separates different foods on his plate so that nothing is touching. This can be seen in the screenshot below:

I remember reading ‘The Curious Incident of the Dog in the Night-Time‘ by Mark Haddon as a teenager and identifying with how Christopher does not like his foods to be touching as ‘Adam‘ demonstrates here.

For me, certain foods that touch contaminate flavours and textures so I often endeavor to separate them on my plate. It’s a logical thing- I’m not crazy, I swear!!! 😛 😉

Ironically, I never put two and two together about having AS myself! 😛

The film is flawed however, in that the character of Adam is a highly intelligent electronic engineer with a photographic memory, further perpetuating the rare savant stereotype…

Dear film makers/screenwriters-enough with the savant skills already! It’s been done to death! 😛

In addition to this, there is one slightly insulting moment in the film wherein Adam is not considered “dating material” in Beth’s social circle. Granted, Beth largely ignores the advice of friends and family to pursue a relationship with Adam, buuuut (* *SPOILER ALERT**) ultimately agrees that they are from two different worlds and cannot make the relationship work.

Indeed, relationships can be hard for us, but that does not mean that we are incapable of making them work (I know several neurodiverse-neurotypical romantic pairings). One of the biggest problems in the relationship between Adam and Beth is that Adam is unable to tell Beth that he loves her. Believing that Adam sees their relationship practically and not emotionally, Beth makes the decision to break up with him as a result.

As previously discussed (Discussion: Love and Romance), saying ‘I love you’ can be quite difficult for an autist, but that does not mean that love isn’t there. I may struggle to say the words to the ones I love, but love them I do.

In watching the film, it’s obvious that Adam loves Beth, he just has a different way of showing her- something that parents, friends and significant others alike should be aware of. We do love you, it’s just hard for us to show it sometimes 🙂

All in all, ‘Adam‘ is a quirky affair that balances both the positives and negatives of life on the spectrum to give a relatively (we’ll let the high IQ/memory slide this time) realistic insight into the autistic experience 🙂